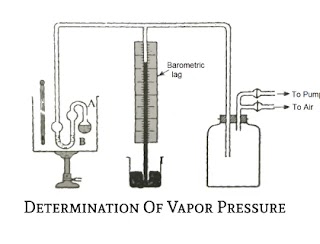 Various types of methods for the determination of vapor pressure are
Static Method.
In the static method, the liquid under test is evaporated in Vaccum above the mercury column of a barometer, and the decrease in the height of the mercury the column is noted.

Dynamic Method.
In the dynamic method, the liquid is boiled under a definite pressure (usually atmospheric pressure) so that the vapors and the liquid are in equilibrium state due to the external pressure.

It is a typical static method. A long barometric tube filled with mercury is inverted in a dish containing mercury. The mercury falls into the tube until the pressure due to the column of mercury is equal to the atmospheric pressure and there is a vacuum produced at the top of the tube. A small quantity of the pure liquid is then introduced into the vacuum with the help of a bent dropper as shown in the figure. The liquid vaporizes and due to its pressure, the mercury column is pressed down. This depression measured in millimeters or centimeters of mercury represents the vapor pressure p of the liquid at the temperature of the experiment.

This method is due to Smith and Menzies. The isoteniscope consists of a bulb A of about 2 cm diameter which is fused to a bulbed U-tube B with limbs about 3 – 4 cm long. The bulb is a little more than half-filled with the liquid under examination and 3 to 4 cm3. of the liquid are also placed in the U-tube B. The isoteniscope is then attached to the rest of the apparatus as shown in the figure and placed in a constant temperature bath.

Fig. Isoteniscope Method for Measuring Vapor Pressure.
On evacuation, the liquid in the bulb A begins to boil and expels all the air. The pressure is then cautiously restored by admitting air so that the level of the liquid in the two limbs of the U-tube becomes equal.